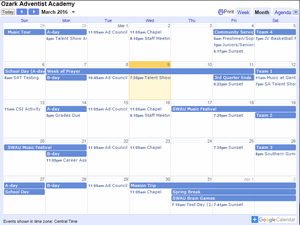 View, print or link to the online Calendar.

Boys' Dorm - What to Bring

Girls' Dorm - What to Bring

If you would like the convenience of receiving the weekly copy of "This Week at OAA" by e-mail, as well as other notifications about special events at Ozark, please subscribe below.

Parents & Students will automatically receive the Newsletter through their RenWeb accounts.

Ozark's live drive-through nativity "From Christmas to the Cross" will be held on Friday, December 17th, from 6:00 - 9:00 pm and on Saturday, December 18th, from 3:00 - 6:00 p.m. Enjoy the sights and sounds from your car as you drive through all eleven scenes from the life of Christ. Everyone is invited.

It is beginning to look a lot like Christmas on our campus this week.

Each year each Ozark class makes a flag based on a verse from scripture. Right before Thanksgiving break class representatives revealed this year's class flags.

The dual credit Freshman Composition class spent Tuesday in the Greenwood District learning about the Tulsa Race Massacre. They started the day at the John Hope Franklin Restoration Park with Dr. Dewayne Dickens, Director, Culturally Responsive Practices for Tulsa Community College, who challenged them to ask what is the one thing [the students] needed to learn from this day. From there the student walked through the Greenwood Rising Museum where they learned the story of the Tulsa Race Massacre from the events that led up to it, the massacre itself, and the rebuilding of the community. The students also visited the Pathway to Hope, the Mabel B. Little House, and the Greenwood Cultural Center all in preparation for their final research essay for the class.
Photo Credit: Ms. Bazzy

Ozark's championship floor hockey games were on Saturday night. The "Screaming Gophers" played the "Buckhorn Unicorns" in the final game of the evening with the Screaming Gophers taking the first place spot and becoming winners of custom T-shirt's from the Student Association (designed by Hannah H. from the Class of 2022). There wasn't an award for the most team spirit but if there was that probably would have had to go to the "Balistic Bananas" with their banana costumes, banana sword, and ba-na-na chants.

We were so blessed to have "Two Guys and the Word" on our campus this weekend. Photos from around campus on Sabbath.

From Friday evening's Evensong practice, to making pumpkin cheesecake in Home Economics, photos from around campus this week.

The weather was threatening to be cold for SA Olympics, so most of the events were held indoors in the gymnasium.

Photos from Saturday night's high jump and tug of war.

The edges were tattered from its years sent subject to the elements. Its colors were faded and its luster gone. As Ozark students sat around the campfire on Friday evening, Benton Robinson, from the U.S. Navy, held a special flag retirement ceremony to retire a United States flag. As each individual stripe was cut from the flag and dropped into the fire, he spoke of its special meaning. At the end, the final blue piece containing the white stars, was also retired into the flames. It was the start to a special vespers where Mr. Robinson spoke of his experience as a Christian in the U.S. Navy. After vespers, students were able to make smores, drink hot chocolate, and just have fun being with their friends.

From the newest addition to the Timm's family, to boys' basketball tryouts, photos from around campus this week.

During the first quarter of this school year, students in Mr. Harris and Mr. Kobliska's third period class studied robotics. A quick peek is available at the link below

On Sabbath afternoon, Ozark students were out collecting non-perishable food items for the Manna Center in Siloam Springs. A quick glimpse into this Sabbath afternoon's activities is available on Facebook at the link below.

Floor Hockey! It started Saturday night. From the Bananas to the Unicorns, five teams of ten students participated in the first night of OAA's Student Association Floor Hockey Tournament. Also, this week Ms. Bazzy's Drama and Stage Production classes were working hard for Wednesday's performance during Chapel and OAA's running club was out running their bi-weekly mile.

This week David Craig, Youth Director for the Arkansas-Louisiana Conference, has been on our campus for fall Week of Prayer. Ms. Simmons percussion class has been working hard downstairs in the music department. With just some drum sticks, a few brooms, some empty buckets, and a few upside down trash cans, they are making some amazing music!

Ozark's Boy's and Girl's Club Campouts are a time for students to bond with one another and to develop a closer walk with God. On Friday afternoon around 3 p.m. Ozark's boys loaded the bus and headed to Camp Siloam. Ozark's girls loaded a different bus and went to New Life Ranch. The girls stayed in cabins and the boys set up camping spots in tents and hammocks. The theme for the weekend in the boy's camp was the second coming of Christ. With the boys sitting around the campfire on Friday night, Pastor Rick Mercer spoke on Matthew 24 and the fulfilling signs of Christ's second coming. In the girl's camp, the theme for the weekend was the fruits of the Spirit. If you had slipped in the back door of the Chapel during the girl's Sabbath school and church service you would have heard Gina Webb, Ozark's nurse practitioner, leading out in an interactive lesson on finding peace in the midst of the storm. To view photos from the weekend, click on the link below.

More News and Photo Galleries are available via the link below.